What is Natural Gas Odorization? It puts the smell in gas!

What is natural gas odorization? Why do we odorize? What is the difference between an odorant, an odorizer, and odorization?

The Problem: Natural Gas is Odorless 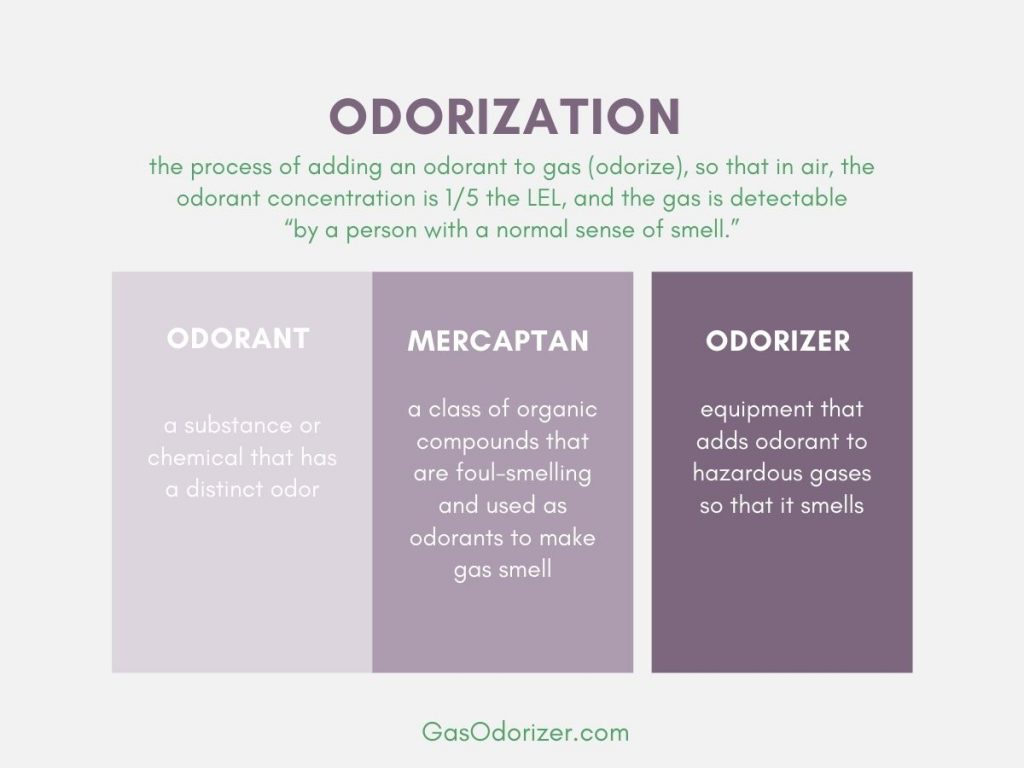 Odorization is the first line of defense against odorless and combustible gases.

Natural gas by itself is odorless and explosive, a fatal combination. One of the worst tragedies in the United States involved a gas leak at a London, Texas school in 1937. In that situation, the non-odorized gas ignited, and the explosion took over 200 students’ and teachers’ lives.

The New London School explosion became the impetus to odorize natural gas in Texas and other states. Today, the federal U.S. government mandates that any combustible gas in a distribution pipeline must contain an odorant so that if the gas is present at 1/5 of the lower explosive limit, a person can detect it assuming they have a “normal sense of smell.” The regulations also require that beginning in 1977, transmission lines in Class 3 and Class 4 locations must also contain the same odorant level. Of course, there are some exceptions to this regulation, and they are in the rules at 49 CFR 192.625.

Most do not realize that odorization is the first line of defense against odorless and combustible gases.

What is an Odorant versus Odorizer?

The odorizer is the equipment used to inject the odorant into the gas or to odorize the gas. It may be an odorant injection system, a wick-style odorizer, or a bypass odorizer.

The odorant is the chemical injected into the gas to deliver the rotten-egg odor. Over many years, a class of organosulfur compounds known as mercaptans and some non-sulfur compounds became the standard chemicals to odorize natural gas.

What is natural gas odorization? The first line of defense against a naturally combustible and odorless gas. The smell causes people to react to a gas leak to get to a safe place and call 911.

What is odorization of natural gas?

Gas odorization is the process of injecting an odorant into a gas stream by an odorizer or odorant injection equipment. The purpose, of course, is to make the gas smell to detect it, because, in its natural state, natural gas is odorless.

What mercaptan is in natural gas?

While the odorant often contains mercaptan, it is not always the case. The odorant is typically a blend of various organosulfur or non-sulfur compounds. It is customary that odorants for natural gas may include tertiary butyl mercaptan, tetrahydrothiophene, isopropyl mercaptan, dimethyl sulfide, and methyl ethyl sulfide.

What is the smell in gas?

Natural gas in its native state is odorless. The odorant, which may contain sulfur compounds, is added to natural gas to give off a distinctive foul odor often described as rotten eggs or hydrogen sulfide.

Who put the smell in natural gas?

Natural gas odorizers inject the odorant in gas. Gas companies distributing gas to end-users have their gas lines odorized to assure safety. Odorizing distribution gas lines gained widespread acceptance after an accident in a Texas school in 1927 caused the deaths of nearly 300 people.

GPL Odorizers is the manufacturer of environmentally-friendly odorant injection systems. If you would like more information about our products, visit Natural Gas Odorizers.

FAQ New London School odorant odorization odorization regulations
What is Natural Gas Odorization? It puts the smell in gas!2020-09-142021-08-27https://www.gasodorizer.com/wp-content/uploads/2020/08/gpl-odorizers.svgGPL Odorizershttps://www.gasodorizer.com/wp-content/uploads/2020/02/fire-fighter-2098461-1200-m.jpg200px200px
About
MercapMan of GPL Odorizers
Methyl MercapMan is the company mascot for GPL Odorizers. MercapMan is here to educate the industry and public on the importance of odorizing natural gas. MercapMan, a/k/a "the good egg" wants everyone to know that the nasty, rotten egg smell commonly associated with natural gas is there for a reason.
Showing 2 comments
pingbacks / trackbacks

What is Pickling of Natural Gas Pipe or Pre-Odorization?Educational, temporary odorization